Oh y'all. This has been a process - a journey - whatever you want to call it. I'm sharing mainly since this is the main spot where I record our big life events - and details get fuzzy when you don't write them down. 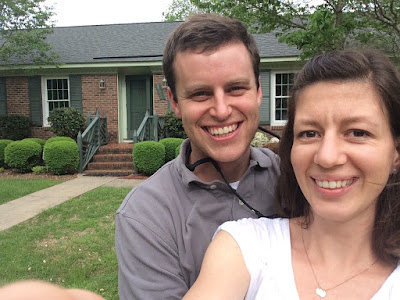 We started looking around for fun and then it got serious quickly when we found a house in our price range in the neighborhood we wanted. We put in our first offer on Oct 31st! {and yes - that's almost SIX months ago! - from when we bought the house - that was 2 months ago}

It's not our dream house per say, but a house with some good bones that will meet our needs for the current and nearish future. What makes it appealing is where it's located - most of the houses in the neighborhood are worth hundreds of thousands more and maybe even a million or so more... and we snagged this little house for a great deal.... a steal really {the house is terribly outdated, not that huge of a house, but big enough for us 1,700 sq ft but we LOVE the area and it has a fabulous yard - something we really value}. We are under the impression that we should be able to sell it quickly because of location and might even make some money off of it after renovations.

Since Tom is in ministry, and we don't know how long we'll be in Greenville {even though we LOVE it here} - we wanted to buy a house in an area where we could sell it quickly. Like my dad said and probably your dad said, "There are 3 things to consider when buying a house: Location. Location. Location.}

So our closing date kept getting pushed back because we were also trying to get a renovation loan along with our mortgage - it would be wrapped in one payment a month - but that meant that before we closed we had to make every single decision about what we planned to do with the renovation - every item had to be priced - for example I had to have a price estimate on paint {bc i'm going to do all the painting} - even had to get an estimate for how much I was going to spend on painter's tape. What a process because we had no clue. Had never bought a house nor done a major renovation.

Not to mention decisions about an entire kitchen renovation and knocking down 2 walls - in a house that we don't even live in - had to have all of those decisions made in order for the loan to be approved.

So that took a while.... and then our contractors kept flaking out on us.... so that extended the time because the renovation loan had to be approved with the contractor who was going to do the work.

Yawn....... that brings us to march 4th - the day before our final closing date - we had everything ready to go. Planned for both of our moms to be here for spring break so that we could take down the wallpaper in every single room and paint every door, molding, and wall {because it's all green!}

Well.... day before closing we get an email saying that the seller is not ready to sell because they still owe 16K on the house for whatever reason.. and they're not ready to close. They had had 4 {FOUR} months to get their stuff together!

And to complicate things-  the lady selling the house is in a nursing home and a lawyer is the one making all the decisions for her.... We had gotten almost zero information from them in the 2 weeks after our 'initial' closing date.  We had to pay to extend our mortgage/renovation interest rate.

Since they were in breech of contract, Tom went to talk to a real estate lawyer to see what our options were. We didn't want to sue them if they didn't have any money and really we didn't want the lady's quality of care to be compromised.

Tom talked to the real estate lawyer and he assured Tom that the seller’s lawyer is not sleazy and that he probably really is trying to figure it out. We heard that the lawyer applied for a loan to cover the 16K. Signed a new contract and included an addendum that said they owed us any money that we'd spent on the house {inspections, loan stuff}. So they applied for a loan to have everything covered.

Well, they didn't get the loan and we learned that the deal was a mess because they had taken out a reversed mortgage on the house and basically owed more on the house than the agreed selling price. Both real estate agents had agreed to forgo their pay so that we could get he house. We were told that if we wanted the house we'd have to put in an extra $6,000 cash which would need to come from our pockets since we would have to completely rework the mortgage for it to be taken from our mortgage. We were prepared to do that since we really wanted this house.

It is so hard to wait for something when the outcome cannot be controlled by us - when we're completely dependent on others to make big life changing decisions for us. {No matter the circumstance - this is HARD. Waiting is hard.} So they were rejected yet another loan, but they were given a cash advance {whatever that is.

So fast forward to last Thursday, {April 15thish} Tom finally meets the lawyer at his office {mind you he's been calling this lawyer almost daily for the last month and a half}. We find out that all we'd need to add is $2,000 - which would basically go to cover the lady's debt from the reversed mortgage.

Friday we hear that we're able to close on Monday and that we won't need to pay any extra money. HOW? We don't know. Not going to ask those questions at this point.

Finally we close on Monday. {April 20th} We're praising God for this blessing and His hand in all of this. This has been such a process. We kept our eyes open for other potential houses that popped up, but none were in the areas that we wanted - and a lot of the houses were too big. After thinking about space and the space we needed versus wanted, we really started loving the idea of a 'smaller' house. Less house = less stuff. I also LOVED that this is a single story. I'm so tired of having to go up and down the stairs for everything. And the heart attacks with little kids is too much for me to handle. Ragan is up the stairs in a flash and has no way of coming down yet {other than just falling!} And it just seemed that whenever I needed something, it was on the other level.

What I've learned about buying a house:
1) It's complicated {or at least this situation was terribly complicated}
2) It's not your house until you've signed a million papers and you have keys in your hand
3) Not to buy anything for a new house until you actually own the house - thankfully we didn't. I would be sitting with a million paint cans in my living room or appliances without the guarantee that the house would actually be ours {even if it is under contract}.
4) That a seller can actually break a contract without any penalty {they would just have to give you what you've put into the house in terms of due diligence, earnest money and inspection fees}.