I stated last night on Instagram that pregnancy is a thriving time for my culinary exploration {exhibit A - when I made nutella filled donuts because what else is there to do when you're waiting to have a baby}. Mainly because I'm generally not concerned with food and see it as a necessity to survive. I genuinely could be content with a bowl of cereal or a sandwich for dinner most nights. Anyways, there's a restaurant in St. Louie, Barcelona, that serves tapas, and empanadas are on their menu, and they're delicious. I've pinned recipes on Pinterest, but never really found one that sounded like what I wanted in my empanada. I used this recipe and then made several adaptations. 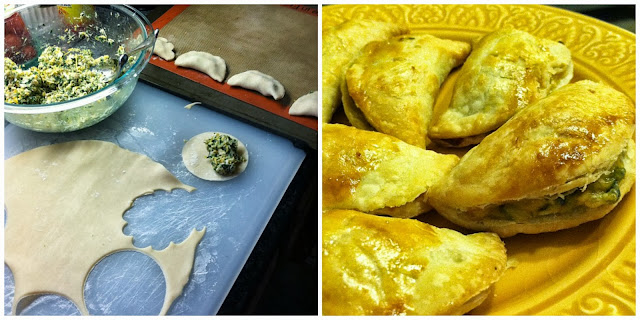 Ingredients:
-pre-made pie crust - 2 pie crusts come in a pack. {I used Pillsbury and it worked well. Maybe next time I'll try to make my own dough, but I just didn't have time for this. You can find the pie crust by the biscuits in the grocery store}
- little bit of water
-1 beaten egg

-about 2 cups chopped, cooked chicken {I cheated and bought a ready-made rotisserie chicken - again with the time issue}
1 8oz package Colby/Jack cheese blend {I didn't use the whole package - although I might next time}
4 oz cream cheese, softened {I softened it in the microwave}
1/4 cup chopped onions
a dash of green onions because I had them on hand
1/2 a container of frozen spinach {defrosted}
1/2 a large garlic clove
1 tablespoon ground cumin {this is where the main flavor comes from - not sure if I used 1 tbs, I just poured until it smelled right}
1.5 teaspoons salt
1/2 teaspoon pepper
{next time I'll add some mushrooms}


-Preheat over to 400 degrees and bake for about 15 minutes. I think I set the timer for 13 min and then kept an eye on them.

We were lacking an ingredient for every sauce we looked up - but Tom came up with this little sauce mixture:
-buttermilk ranch
-sour cream
-chipotle spices

Tom and I were really impressed with the recipe and would even serve it to guests, so you know it's acceptable.
at 12:09 PM