So I've come to a realization. Maybe you've thought it before, but nothing creates bad habits or breaks good ones faster than sickness. Right?

Up unil last Friday Simon had no interest in watching tv. It wasn't ever a regular part of his daily or nightly routine. Considering the crap on tv; I was totally happy and fine with this. Well, starting Thursday night until the present, Simon became a little sicky. His fever spiked to almost 104 once or twice and he just needed to be held. All. The. Time.

So, I did what any logical mother would do and turned on Netflix since Simon didn't want me to read to him. We started watching pretty much every episode of Dinosaur Train ever produced. I've learned a lot about dinosaurs, and I'm sure Simon was adequately over-stimulated. The routines and good habits I've been working so hard to maintain were thrown out the window, and Simon quickly developed the bad habit of wanting to watch tv all the time.

Once he started feeling better we had to change this habit pronto. It took a fit or two, but now when he says Do-Du and points to the tv cabinet, I say, no, not today, he shakes his head yes as if to understand that this around the clock tv watching is a thing of the past {for now}. So, that habit is broken. Now I just need to get back on board {which is hard to do since I've gotten the cold that Simon had/has}. 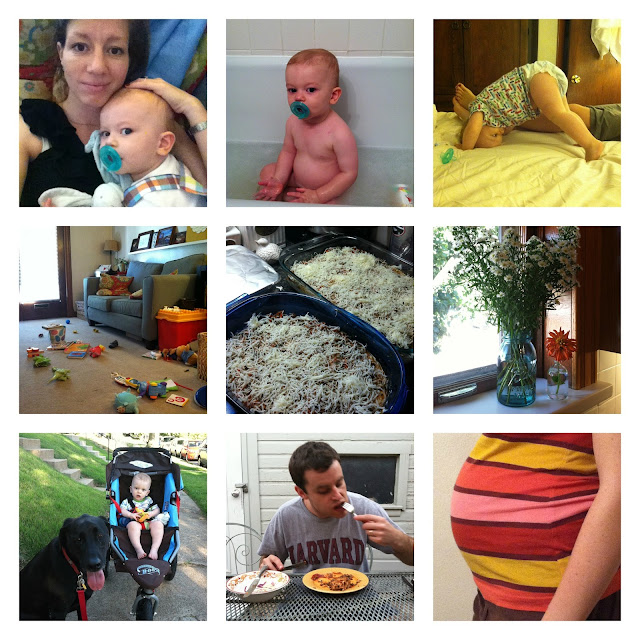 1. Simon and I were in this position ALL weekend. Being a mama of a sickling is hard work, y'all.
2. I stuck him in the tub at 11:50pm on Saturday night after watching the Georgia game to see if we could break his fever. He probably wasn't sick then, just upset that Georgia lost.
3. After feeling a bit better on Sunday, Simon started showing us his downward-dog position. No earthly idea where he's gotten this from because as y'all know, I don't exercise.
4. The toy tornado that comes through my living room, at least 3 times a day.
5. I attempted my first lasagna. Even made a gluten free one with rice pasta for a friend who just had a babe.
6. My preferred type of flower to receive. Y'all, roses are expensive and die within like 4 days {don't waste your money - flowers like these will often last for 2 weeks}.
7. Once the weather cooled off a bit, we took our children for a walk.
8. Enjoying some lasagna and salad outside. I'll need to share this recipe. It's fairly easy, makes a ton, and has veggies in it. Oh, and it freezes really well. It was my super-food after Simon was born.
9. Photo of my 18 week old baby. How the heck am I almost 1/2 way through this pregnancy??? I feel sorry for this babe; he or she is already getting trampled on by Simon.

Dear lady who works at Missouri Health Care,
It's rare to meet people like you. People who actually do their jobs. I so appreciate when I called to find out the status of my insurance that you immediately responded, "Uh-uh, this has been pending for way too long. I mean, you're pregnant. They should have made a decision about this already. I'm going to get someone to look at this immediately" THANK YOU! I wish you could read your letter - just know that I appreciate people like you.

Dear blog friends:
I really appreciate good service and when people do the jobs they were/are hired to do. I even blogged about it once.
at 4:07 PM