why I love my Ergo & why you should get one

Yesterday Tom and I met my sister and her little family to walk downtown at the market. The market seems to be "The thing to do" in Greenville on a Saturday morning. This isn't a post about The Market though. While we were walking around, we saw a 7ish months pregnant woman - and I don't even remember how - but the next thing I know, Nadine and I are trying to convince her to get an Ergo. Tom was like - man - Ergo needs to hire you as a spokesperson. So - here is my unpaid promotion of their product.


Why I like the Ergo:
- Simon likes to be in there - happy baby = happy mama. Enough said.
- I feel supported and it doesn't strain or hurt my back. The bulk of the babe's weight rests on your hips - so it helps me feel centered.
- It's super soft - so not scratchy - and comfortable to wear.
- It's easy to get him in and out of it, and I've been able to use the ergo by myself - even when I put Simon on my back.
- You're able to have your kiddies in the ergo until they're 45 pounds! {not quite there yet - so I can't speak from experience}. But I once had a quick conversation with a stranger in a Target parking lot - and when she saw my ergo - she told me that she still puts her 4 year old in the ergo to calm him down when he's hysterical. She said, "The ergo is magic, it's the only thing that can calm my son down when he's really upset." 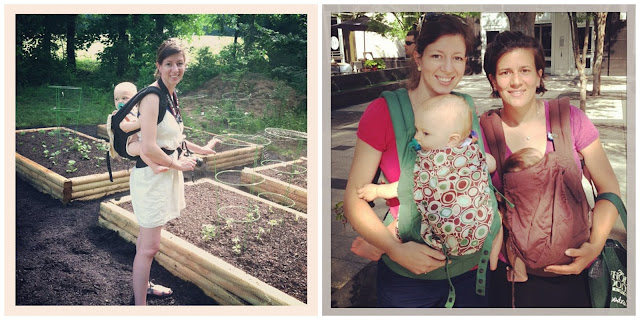 How I've used it:
- In church when I need to soothe Simon.
- Most useful way has been when I'm traveling on an airplane - especially by myself. I've traveled with Simon twice by myself - and have used the ergo both times. I can say that it honestly was the best thing for traveling. I had him on the front and a backpack on my back. Super easy. You can even walk through security without disassembling {but they do rub your hands to see if you have explosives on them - fyi}. It's great because even when you have the little ones in a stroller - they just want/need to be held sometimes. If you have the ergo - you don't find yourself in that all-too-common scenario where you're holding a baby and awkwardly pushing an empty stroller with one hand {been there}.
- When Simon was littler, I used to carry him in it and do stuff around the house. Love it for the pure fact that it frees up my hands {both of them}, and I don't worry about him falling out. And who can't use two hands while trying to do stuff?
- I love to put him in it to shop. When he was really little- ok he's only 1 - littler, it meant that I didn't have to take up my grocery cart space with the car seat.
- I've used it at public events when I don't want to bother with a stroller in a big crowd.
- Anytime I've needed to hold Simon and need full use of both my hands {so essentially all the time}. 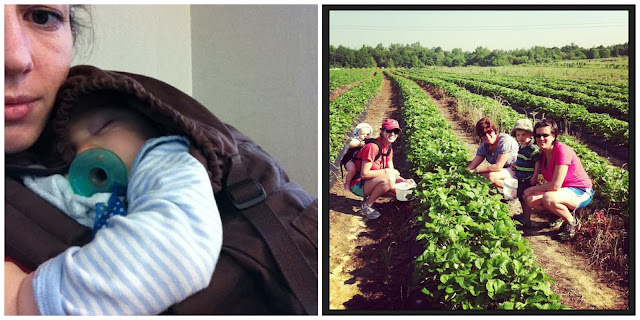 Why I think it's better than other carriers:
- I've tried the Moby wrap. and each time I used it - I found myself using my hands to support him - despite the fact that the wrap was supposed to support him. No matter how I wrapped him, how tight or what different position - he just didn't seem completely supported by it. It's just not a try hands free contraption {in my experience}.
- I know plenty of people who have/and are using the Baby Bjorn. I've never used one - but it just doesn't seem like the babies are that supported in them. I always feel like the kids' limbs are flailing - doesn't seem like it's as supportive for the littles. It also seems like the way it's designed - the main weight of the babe is on the top of the parents' back - it seems more logical that the bulk of the weight should be on the parents' hips - or around the core.
-Yesterday I saw a carrier that was a similar design to the ergo {Infantino?}. A main difference was that it tied around your waist {like a shoelace} instead of buckling like the ergo. I love how the ergo is super easy to buckle - and once it's set - you basically can use the same setting each time {unless you're changing from front to back carrying}. 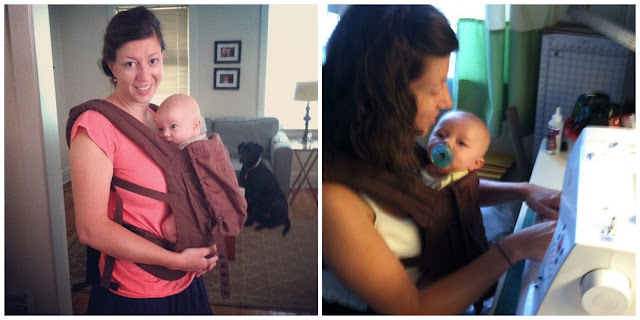 If you're going to get an Ergo:
- I suggest buying an organic one - not because I'm crunchy - but because it's a lot softer than the regular canvas one. I've used the canvas one - and it's scratchy. Just saying. It's worth a few extra bucks to buy the one that's softer.

Drawbacks:
- It's pricey {$115-$145 depending on organic and also the color}. Based on my quick search on Amazon - it definitely appears to be the most expensive baby carrier.
- I will note that when he was on my back and I went strawberry picking - my legs were sore for several days. But that's due to my lack of squats and lunges - not because the Ergo strained anything.

Opinion:
-Considering how much I've used mine and based on how comfortable it is for me, and Simon, and how supported I feel and he seems - it's worth the $$$.
-Do yourself a favor and add this to your baby registry - or buy it for yourself. :)

As always, feel free to email me if you have any questions: whatthehartlikes {at} gmail {dot} com
at 3:06 PM