You might remember the secret service I alluded to in one of my posts; well, y'all, here's the story in all its glory.

I wasn't planning on blogging today because I'm in the middle of sewing and making dish towels for the craft fair I'm in this weekend - however - there are times when stuff happens and I just HAVE to blog. Like the time my 5 year old neighbor told me that she says "good morning mother .......",or the time I got a postage scale and my life was changed,  or like the time a federal agent crashed our lunch.

Let's play connect the dots. Do you remember when I blogged about the Federal Watch Line in my Friday Letters? It's kind of funny, but not really. It's true. Federal Watch Line has been in our internet options. This is a fact. Store this for a moment. 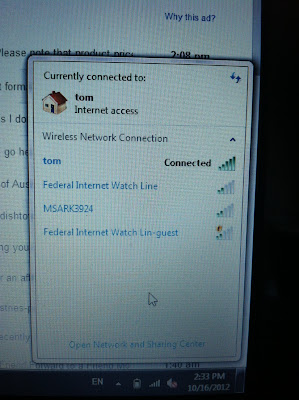 The building next to us has 4 apartments - 2 of the people were friends. I identified them respectfully as neck tat and arm tat. Neck tat moved out not too long ago. Arm tat and his wife still live here {or next door}. They're nice people - but they trip my radar {it's a long story - but I have "senses" about people. In the Christian world it's called the gift of discernment; I just call it my 6th sense}. Anyways. They have tripped my radar. Right after Simon was born, Tom invited them in to see Simon. It made me really uncomfortable. At first I though it was just the first glimpses of my "mama bear" protective instincts kicking in, but then I realized I felt uncomfortable because "they tripped my radar." This is a fact. Store this for a moment.

Tom is friends with everyone on our block; he knows everyone's name {doesn't refer to people by the location of their tattoos}. About a week ago, Tom and Arm Tat were having a conversation and somehow it came up that Arm Tat had been arrested for a murder in L.A. {go back. read that again}. Apparently he wasn't convicted and they'd arrested the wrong guy. Which means that he didn't commit murder, right? Not sure if there was a trial or not. Another fact for you.

Yesterday I took Agnes and Simon for a walk, and when I returned, Arm Tat and his wife were walking to their place {past our place}. We chit-chatted for a while, but then Arm Tat said something in Spanish to his wife, and she said that they have to go inside because the mosquitos were bad. I just said ok and didn't think a thing of it. Fact. 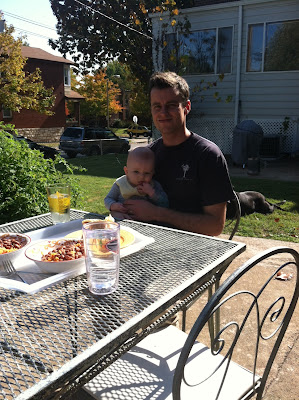 So today, Tom came home for lunch {which he doesn't normally do}. We decided to eat lunch outside since it's unusually warm considering just last week I was freeeeeeeezing. While we were eating, a black SUV slowly drove by and I had a feeling that they were cruising for something and felt like they'd stop, but no one stopped. After we ate, Tom tended to his urban garden while I played with Simon. A guy with a military cut {you know what I'm talking about} and a bulletproof vest underneath his shirt flipped his FBI badge and asked Tom if he could talk for a second.

He asked Tom if he'd seen Arm Tat {he didn't call him that of course, but it was obviously the guy he was looking for}. The agent asked Tom what kind of car Arm Tat drives, and Tom told him Arm Tat no longer has a car - he just walks everywhere now. Then the officer told Tom not to mention that there were any federal agents in the neighborhood and climbed back into his SUV. As he was about to drive off, Tom called after him, "Is there anything we should be aware of...?" The officer thought about it for just a second, and said, "Nah, we just want to ask him some questions." Right... the FBI is staking this guy out and talking to his neighbors just because "they need to ask him some questions."

Now it all makes sense. I now know why we have a Federal Watch Line on our internet options, and I like a dummie totally believed that there were mosquitoes out in October when really Arm Tat probably told his wife that they needed to get inside because you never know when the FBI might be looking for you.

Dear FBI,
If you've tapped into our internet and are reading this, I have a little 5 month old baby; please let me know if we should move. And sorry if I'm not supposed to be blogging about your stake-out.
Thanks,
The Harts