It seems like it was about a year ago when I blogged about my friend Elvis. If you've been following this here blog for a while, then you might remember Elvis, the 16 year old-ish grocery store person; if not, you might want to catch up and read about him here. My entire Elvis experience led me to think about why it's so difficult for people to just do their jobs - to do it completely - and to do it well. {Isn't it frustrating when you're checking out somewhere, you're in a decent mood, haven't done anything to tick the cashier off, and they act like you're ruining their life? Yeah - I hate it too.}

I had such good shopping experiences on Friday that I was going to blog about that - but then forgot about it until I received more good service today. So on Friday I was shopping in Target {I think that maybe I've been there everyday of my maternity leave so far - which is pretty easy to do since it's just a mile from our house = DANGER}. I was standing in line, there were about 23ish people who wanted to check out and they only about 2 check-out lanes open. What happened next was classic Target and something I've experienced numerous times. The manager assessed the situation - and instantly all around the store you heard the call and the demand for more cashiers. Within about 3 minutes I checked out and was on my way.  {Now I love the Wal-Marts - they have low prices and offer things that you sometimes can't get at Target. However, how many times have you waited in l-o-n-g lines at Wally-World. They'll have about 30 check-out counters, 1 check out lane open, about 500 people in line, and about 600 employees just standing around. I get hot-headed just thinking about it}. Thank you Target for offering such a good experience. Every time.

Next I went to Trader Joe's where everyone is always willing and ready to help you find what you need. When I checked out {Friday - the day before my due date}, the chica asked me how I was doing. I said I was doing fine, was just waiting for this baby to come out. She replied, which do you prefer, chocolate or flowers? Of course I replied - chocolate. And she just grabbed a chocolate bar from the little display thing and gave it to me - for free! It was awesome. This is not the first time I've had great service from there. Once I was checking out and had a bag of those little "New Potatoes." There was 1 rotten potato in the bag, no big deal, but the lady called someone to get us a new bag because of that one little rotten 'tater. I was grateful. That's good service. 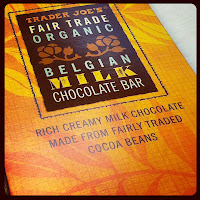 Then today - as I was driving I saw that my engine "thermostat" was above the H and in the red area. 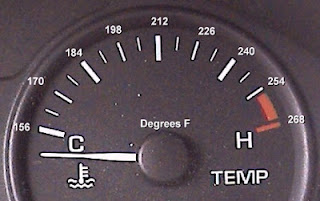 I did what all girls do and called my dad. He said that my engine was in need of fluid and I should pull over immediately before I burn out my engine. I stopped at Sams and hoped that they could help me. They said that they could check my radiator fluid, but that they didn't have anything to solve the problem with. The man was kind though and told me that there is an auto shop not even 1/2 a mile away. So after letting my engine cool for a little while, I drove to the shop. I explained my car situation and the guy told me to pull over to the second garage door. I pulled up - they filled my fluid {which was non-existent} and had some small talk with the guy who was taking care of my car. I told him how I used to work in my dad's shop when I was a teenager. I loved it. I was the "secretary" and one of my favorite jobs was collecting the dirty oil rags and washing them. :) After he took care of my car,  I asked the guy if I should go inside to pay, and he said, "Let me go check." He came out and said that the manager said to, "Have a nice day." They could have charged me $100 and I wouldn't have know. It feels good not to be taken advantage of and to have people who just wanted to help. I told him that if there was ever anything that I needed for my car, I'd come to them.

Maybe it's the fact that I have an over-swollen belly, but I really appreciate when people care about doing their jobs well and are genuinely interested in helping people.

*For those of you in St. Louie - the place was Combs Auto center on Big Bend - I'd recommend going there if  you have car needs.

Oh yes, if you missed my post this morning - the voting is still open for when little Simon is to arrive - since everyone was wrong. :) It's not too late to make a prediction for when Simon will finally stop staying at Hotel de la Uterus.
at 8:16 PM