Since Tom had an entire week off for fall break a few weeks ago, we thought it would only be fitting if I took a day off so that we can head even more north to the city of Chicago for a little get-away. It had been a long time since we'd been on any type of vacation together, and we didn't want to wait to go to Chicago in, let's say January or February,  because I've heard-tell it's just plain miserable.

We departed a little later than expected, but all seemed like it would still go according to plan. We had a boat tour scheduled for 4:30, and it still seemed like it would all work out. Our plan was to leave our car at a park-n-ride, take a train into the city, and then we wouldn't have to worry about the steep parking prices. Well...Tom ran into the park-n-ride to pay and was advised, by a woman-cop, that if he left his car in the parking lot over night, it would get broken into. So - plan #2. We didn't really have one, but in order to make it to our boat tour we had to drive into the city fast, in rush-hour traffic. We took a few wrong turns in the city because you have those frustrating one-way streets that lead you to where you don't want to be. But after we parked, we RAN like tourists to our little boat and made it at exactly 4:30. That's the only drama we really had for the trip, so not a huge deal. I just wasn't planning on that little exercise I was forced to do. 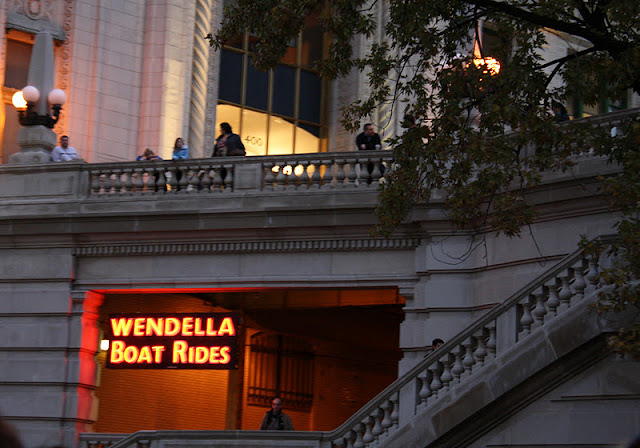 The boat tour was worth the money {and the run}. The architectural tour came most recommended when we inquired about what the best things to do in Chicago. The city is much larger than Tom or I expected it to be, and it was an adventure to see the concrete jungle from the water. 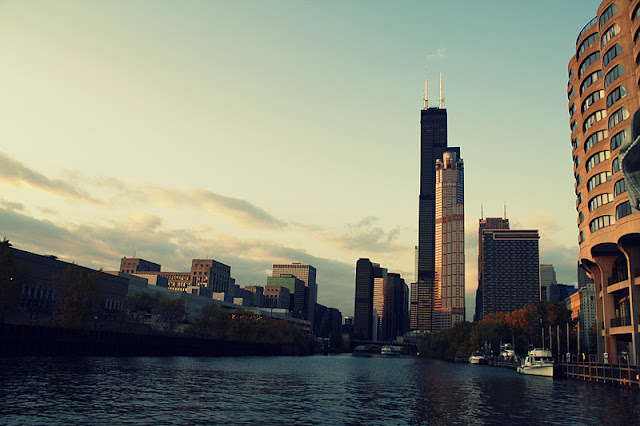 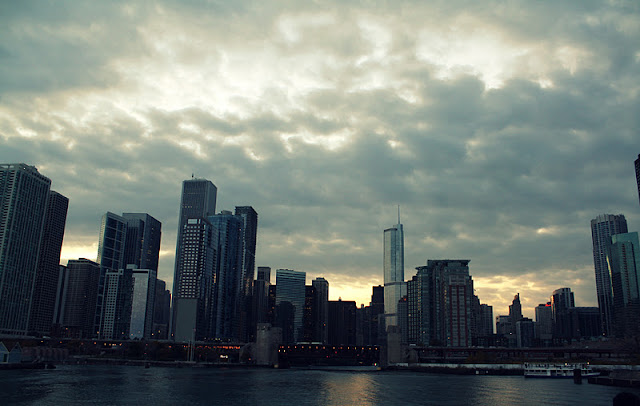 From here we found a safe place for our car and settled into our hotel. We proceeded to walk down the Miracle Mile which is a shoppers dream. Our only priority was food. There were two places that we'd heard of that makes fabulous Chicago stuffed pizza, and after we saw the line for the one that we wanted to try, we walked to our second choice. But the pizza was amazing, and it's a good thing I don't live in Chicago; you know I'd eat there every night. {Sadly I didn't have my camera to document the pizza event.} We decided to hit the sack after our filling dinner so that we could wake up early the next morning and continue our tour of CHI town.

After getting our daily transit pass from the local Walgreens, making a successful subway connection, and taking a bus in the wrong direction, we finally found our way to Toast, a little local breakfast joint. 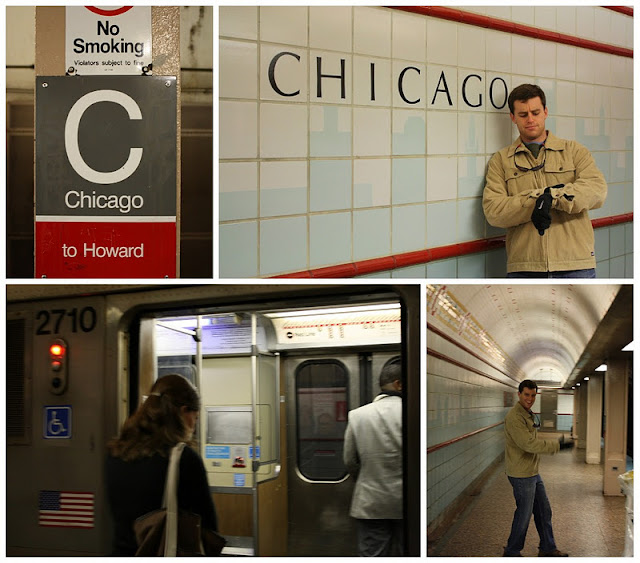 Tom had pumpkin pancakes which were so yummy. I ate pesto scrambled eggs with tomato and prosciutto - also really delicious. Our only regret is that we both cleaned our plates, and we weren't really hungry for the rest of the day {lesson learned: don't need to clean the plate}. A local recommended that we head over to Wicker Park for shopping and hipster living.

We toured parts of Wicker Park, the zoo and bo-tans {botanical gardens}, and made our way into the city again. 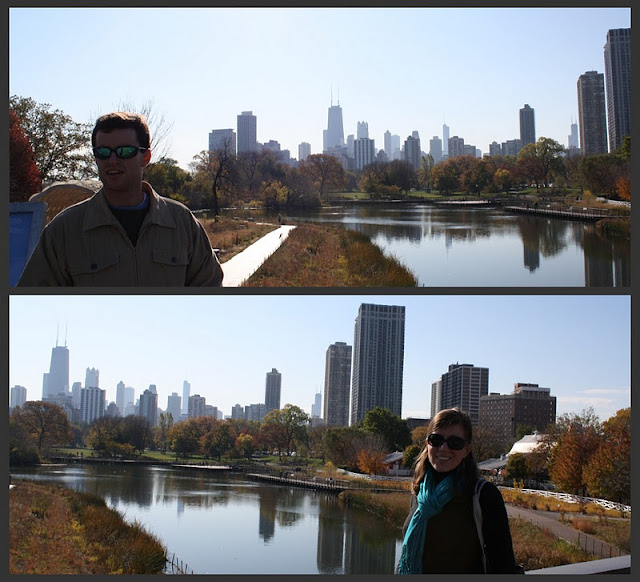 We ate a snack and headed back to the hotel for a nap {and so that Tom could check on the Georgia/Florida Game}. I needed this nap and was exhausted from the many miles that we'd already walked. Millennium Park was a must on our to-do list for our trip, so we headed there after rejuvenating. 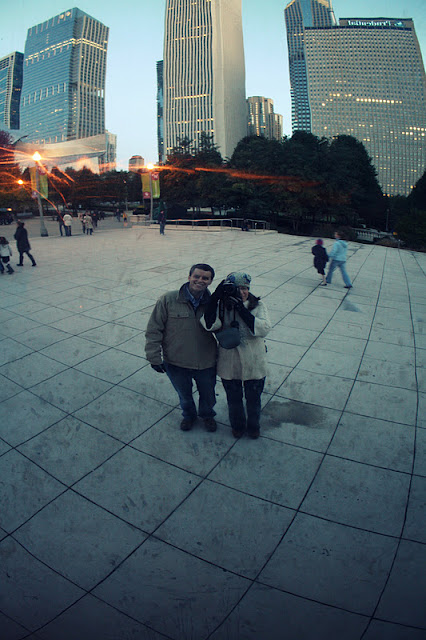 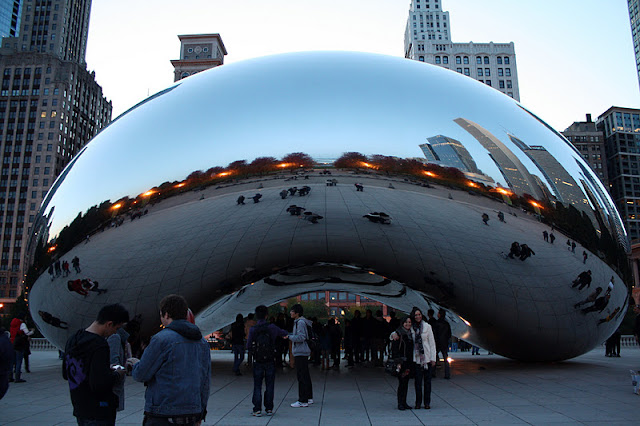 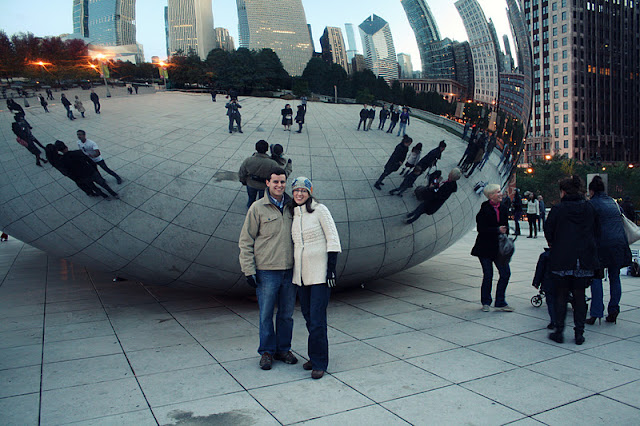 And it's a good thing we visited the bean - it seems that Tom 'found himself' there. 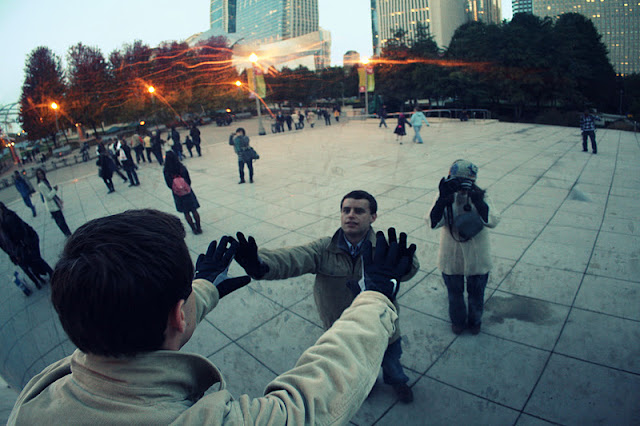 We shopped a little and then walked, a lot, to find this gem hidden on a side street. 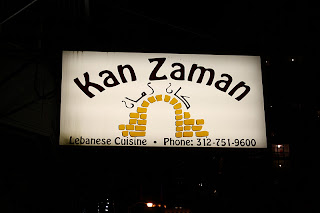 We were still so full from breakfast and weren't able to eat more than we wanted to. After that we headed to the Hancock Building, which is one of the tallest buildings. We went to the lounge for cocktails and to view the city at night. {I know this is a TERRIBLE photo, but my camera was not cooperating and I didn't have the patience to fiddle with the settings, but I wanted to give you a glimpse of the city at night}. 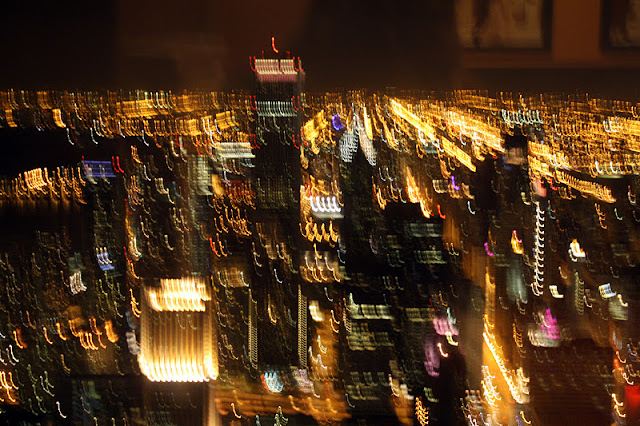 The following morning we stopped at a Belgian bakery that I'd spotted the previous day. I was sure that they would have chocolate croissants, and I was right. It was sooo good and a great little morning treat. 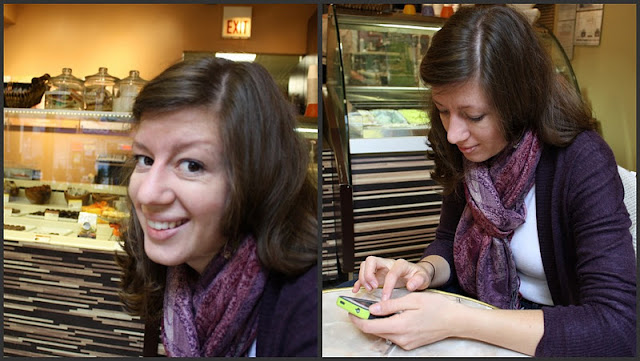 Do you remember that iPhone I got for my birthday? Have I mentioned that I don't think we would have made it in Chicago without it? It's so ridiculous what technology can do. It tells you exactly what train/bus/subway to get on, the time that it arrives, when you have to get off. It was a fabulous navigator. After our little breakfast of croissant, coffee, and latte, we took the subway to Chinatown. I was excited to go since it had been years since I'd been to the San Francisco Chinatown. 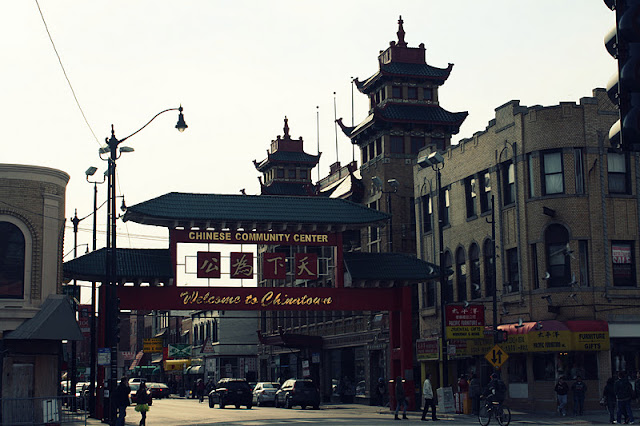 I did a little bit of shopping and bought some candy to try. I was really on the look-out for this candy we called "White Rabbit" sweets that we used to get at a Chinese restaurant we frequented in South Africa. Tom was tempted to buy a turtle or eel, but then we didn't really know how to cook either of those. We saw many un-identifiable food items that I wish I knew more about or understand how Chinese folk use it in their cooking.

Next we stopped at a restaurant that was recommended to me by a Chinese teacher at my school. It wasn't just another meal, it was a dining experience for sure. Tom was in the restroom when a lady and her cart came by and started showing me food in different little stainless-steel pots and I had no idea what was going on. We hadn't even ordered our drinks, and the lady didn't speak any English. She just pointed and wanted to hand me the food. 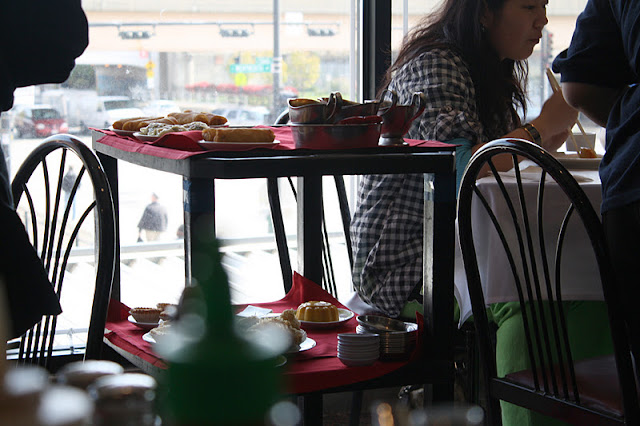 I just shook my head 'no' since I had no idea what she was even pointing at - it could be turtle or some of those unidentifiable foods I saw. When Tom returned we looked at a menu with pictures and started pointing to the items we wanted to the waitress. Then they came around with other carts and just placed, what seemed to be what we ordered, on our table. We'll call this a type of "mobile buffet" where there are many carts circulating the restaurant with different foods. You just point to what you want, and then they bring you what you want. {When I later asked my teacher-friend about this, she said that this is the custom way that food is served in restaurants in China. Interesting.} 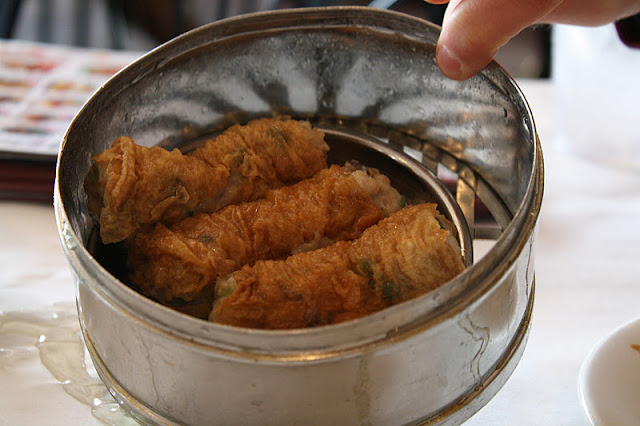 The main reason why we wanted to come to this restaurant, other than the recommendation, was that my teacher-friend told me that they had dimsums. I hadn't had dimsums since San Fran and desperately wanted to eat them again and let Tom try them too. By his cheesy smile below, you can tell that he liked them very much. But then again, there are few foods that Tom doesn't like. 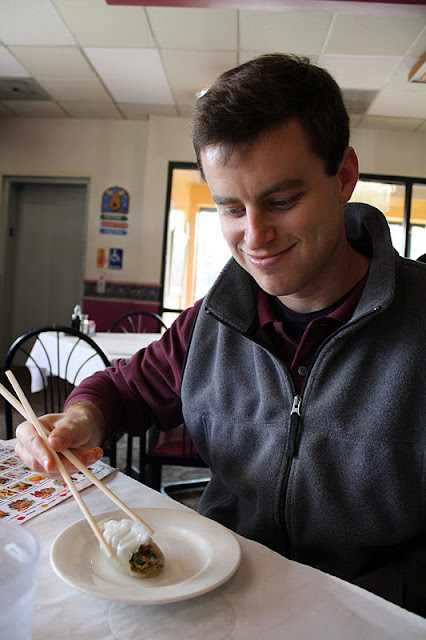 {if you look to the left of his hand, you can see the picture menu we picked from}

Every time we travel somewhere, we learn how to improve our trips. We have few regrets and were glad to have planned our trip before we left for Chicago. I definitely want to go back before we leave St. Louie.

OH! And we bought our first baby item! I've had a few items sent to me, so we have some items for the  bun in the oven, but I thought this was an investment "piece." 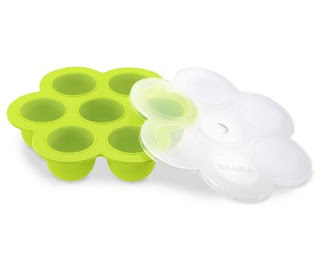 If you're making the assumption that I plan on making some of my own baby food, then your assumption is right - those are my intentions. :)