At first I had no idea how we were going to get to Albany without taking 2 cars. We had 4 people, 2 dogs, all of our "stuff," and coolers packed with food for the weekend. We really didn't want to take two cars, and then Edward offered up his family fan as our party van (a photo that I will surely include). A party van it was. It was the perfect vehicle for our active children.


There was a little of this going on: 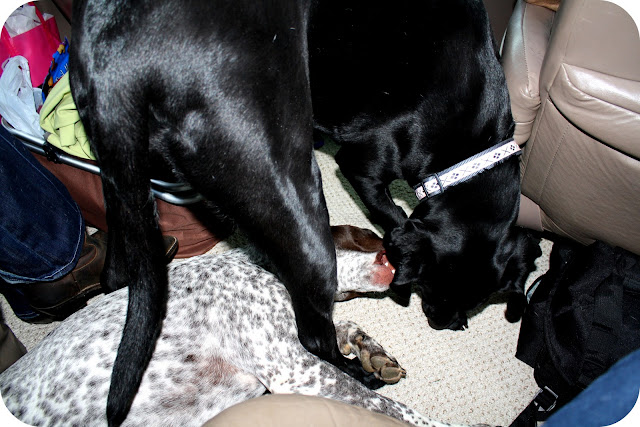 And a lot of this going on: 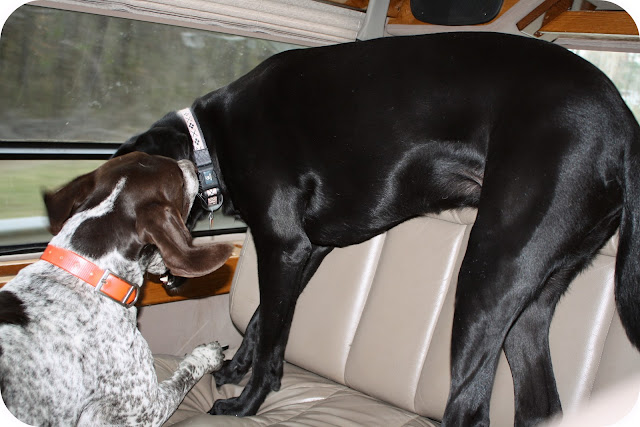 Once the sun set, we were able to enjoy a little of this - a party van must: 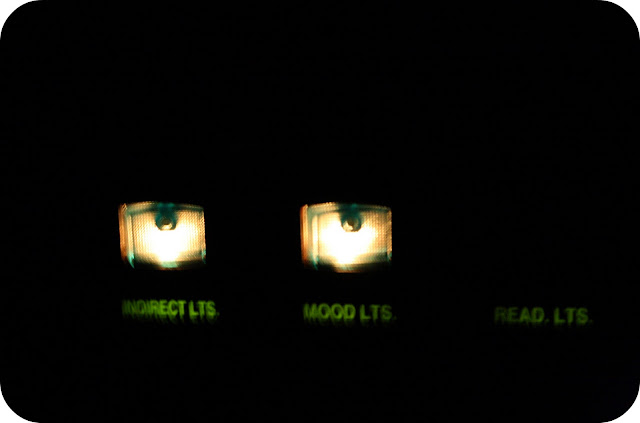 This isn't the best photo I've ever taken, but I wanted you to experience the mood lights. 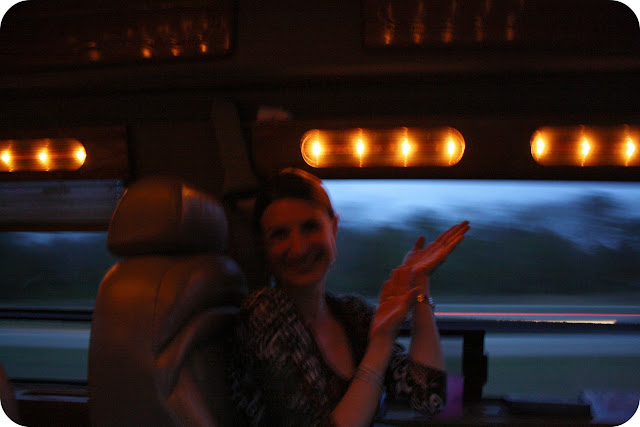 After we arrived in Albany, we headed to the local Outback to have the last supper before the race. 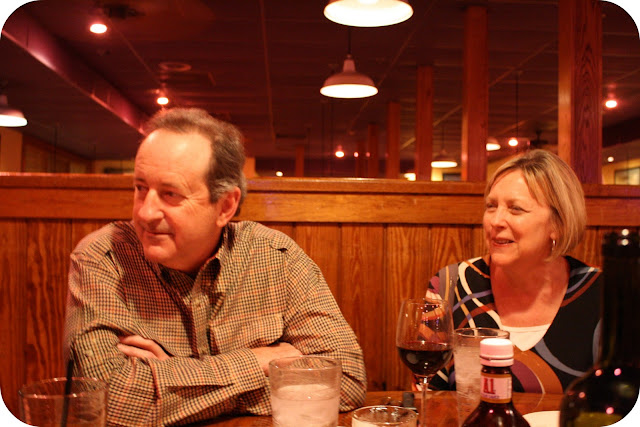 It was most enjoyable to have both families together (except for my dad who was putting sod on Lorine's wedding site). 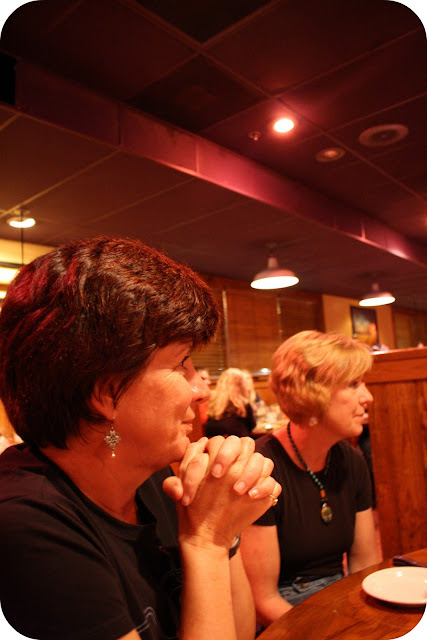 I don't know why, but the bread always seems to be one of my favorite things at a restaurant. We devoured four of these loaves. 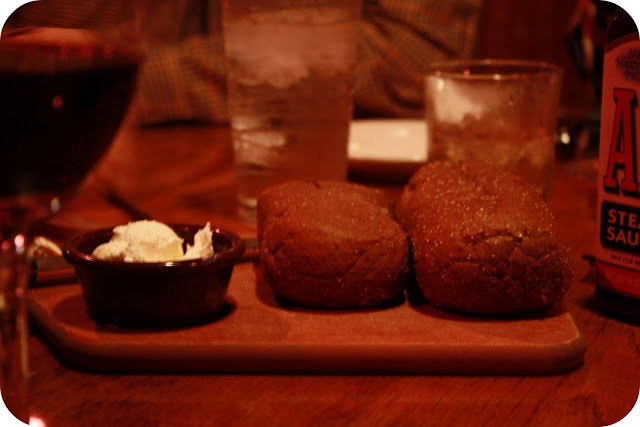 After Outback, Elizabeth and I made some signs for our runners. 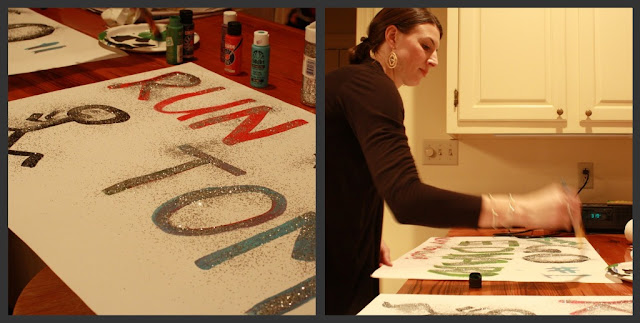 Many running strategies were discussed and rediscussed. Tom was told by my mom to drink milkshakes and eat lots of greasy food the night before. With rain threatening to attend the race, we worked out a sign in case anyone needed a hat: 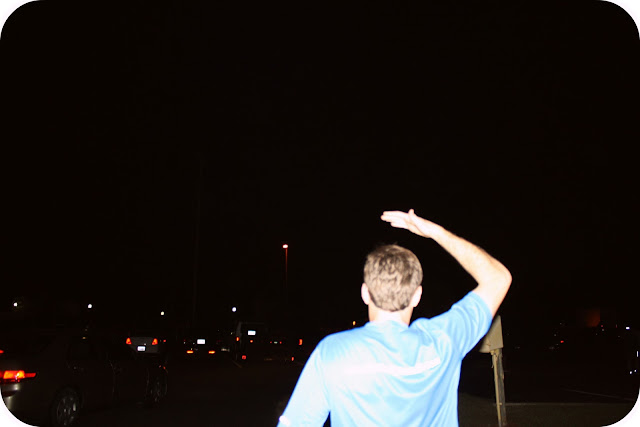 And then there was the very important sign for more band aids for a certain chesticle region: 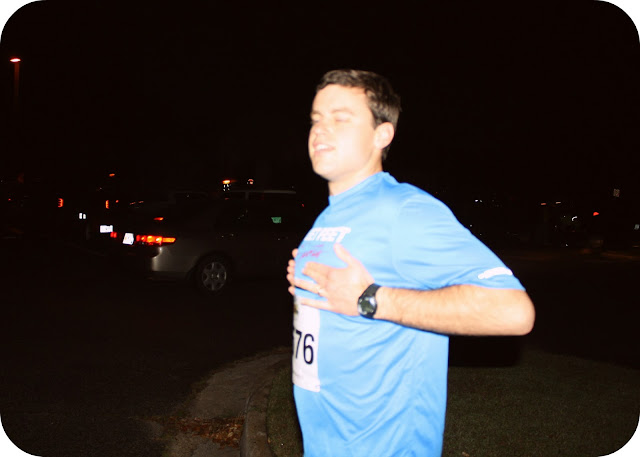 The boys didn't want to cross the start line before the race began for fear that they would set off their chip. 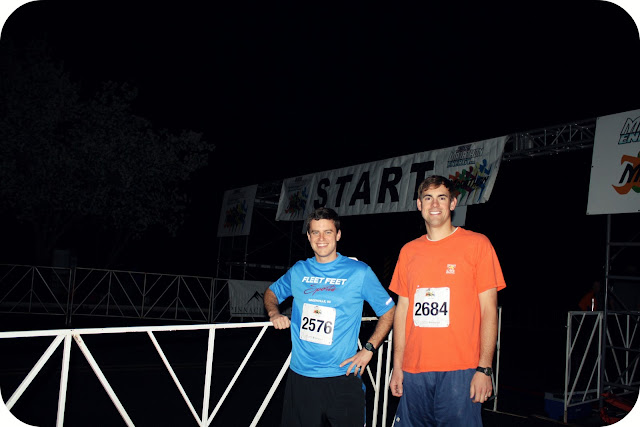 All the runners before the race. 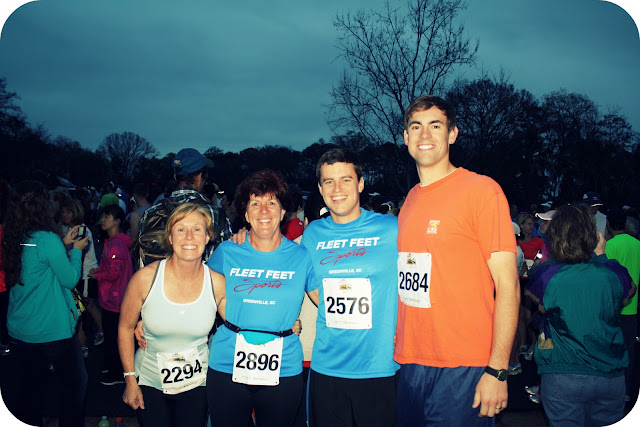 Then this is my favorite photo from the weekend, for so many reasons: 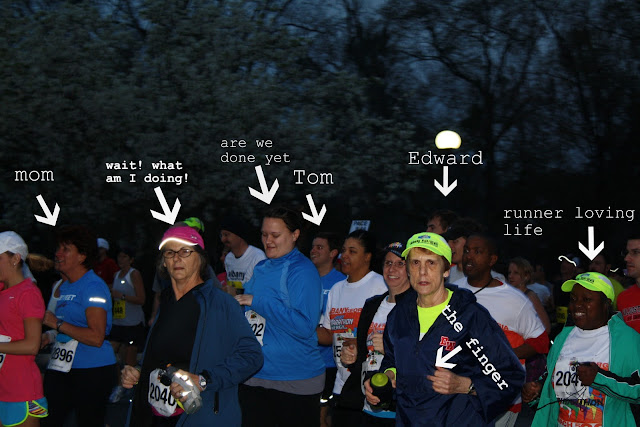 Elizabeth and I hopped in the party van to chase the boys around town. We were able to stop, cheer, and wave our sparkley signs twice. 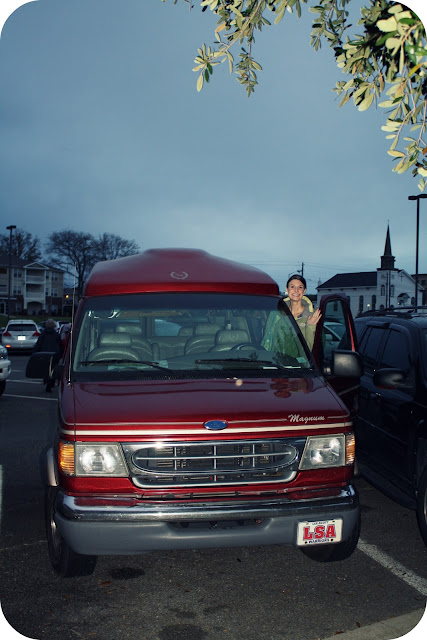 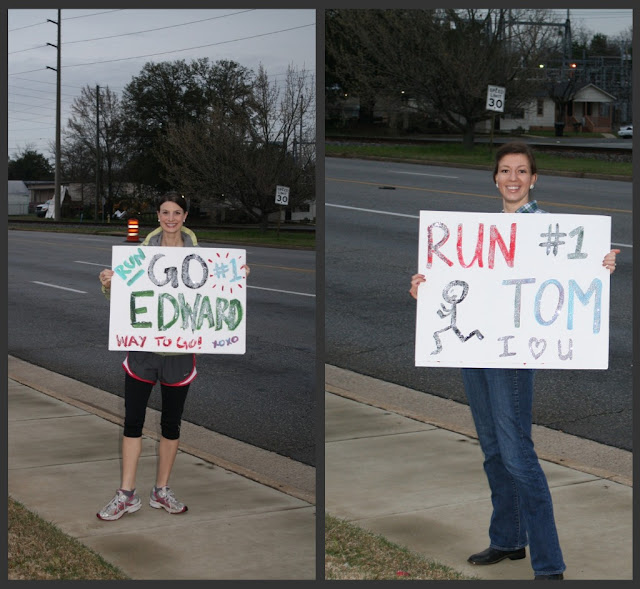 The boys were basically smiling the entire way. 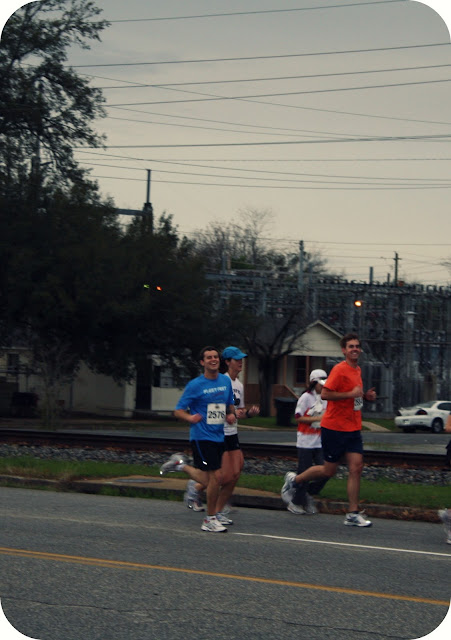 My mom was also flashing a smile; running can be so much fun! 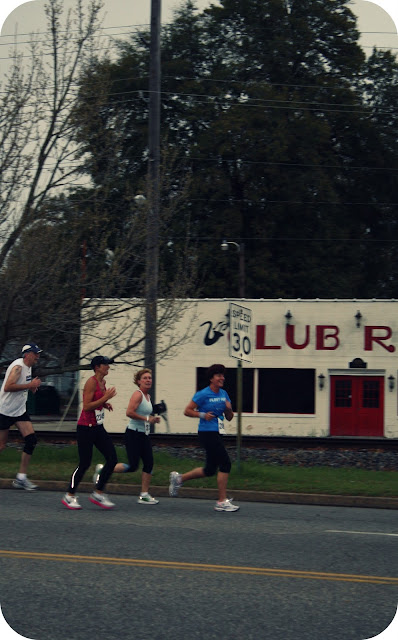 Here Tom is giving a fist pump at mile 8. Only 5 more to go, no biggie. 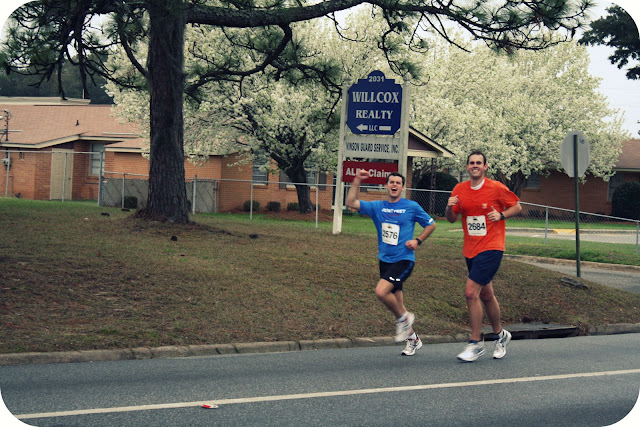 After meeting them at mile 8, we raced to the finish to watch them cross the line. 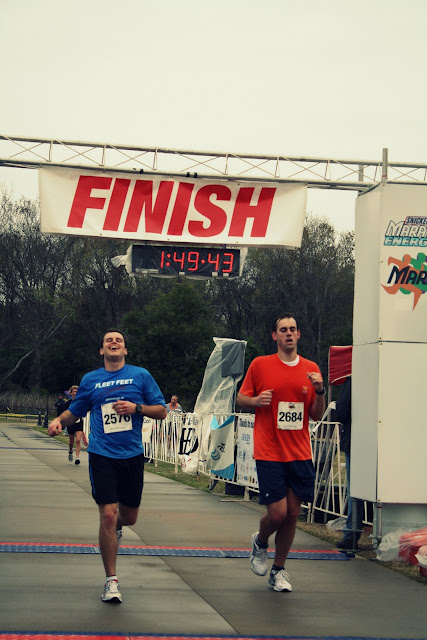 I think Tom was smiling so much because he beat my mom. 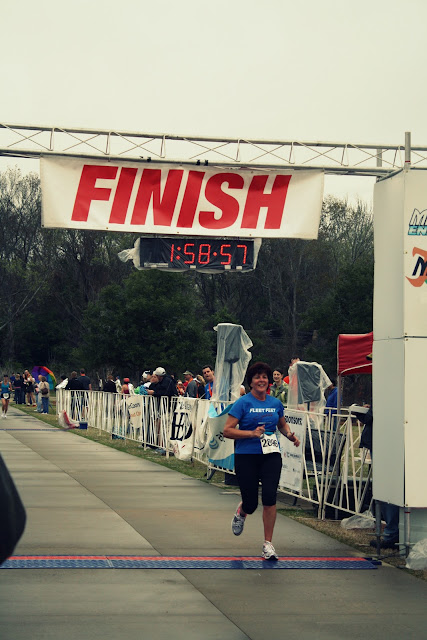 Everyone celebrated with a glass of beer since Miller was one of the sponsors. 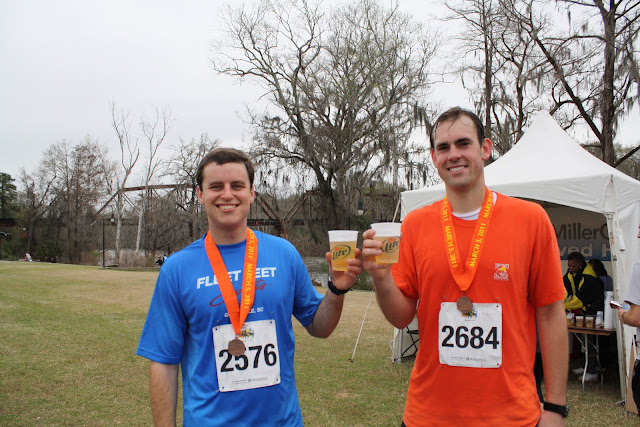 Both moms were proud of their son. 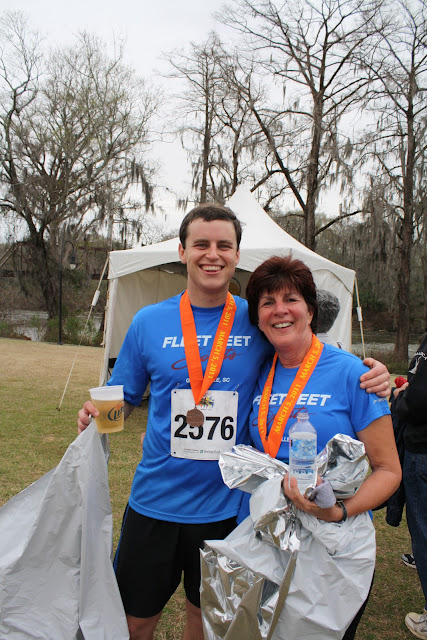 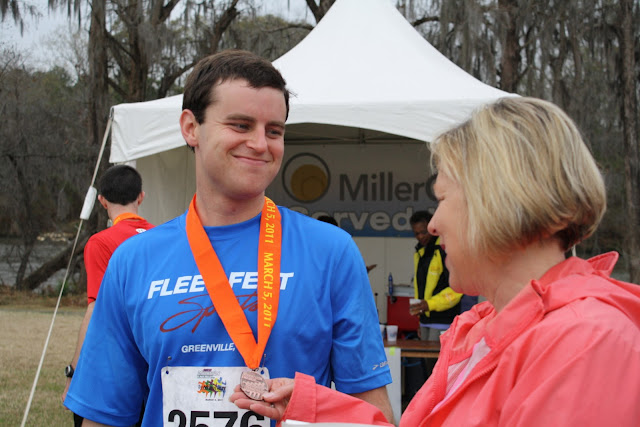 A great weekend was had by all; I'm missing a few details which I may include later. I think I'm through with this post for tonight though. We were glad for the experience and to have such great travel friends. 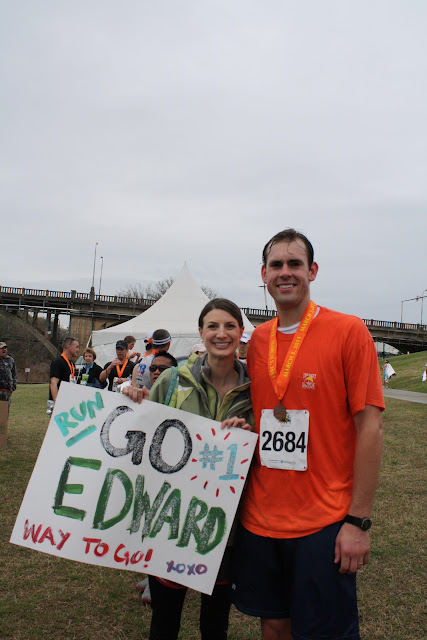